Democratic Situations challenges researchers and students in Science & Technology Studies and related fields to treat democracy as an empirical phenomenon. This means leaving behind off-the-shelf theoretical notions of democracy that may have travelled into STS unexamined. The alternative strategy pursued in this volume is to pay as much analytical attention to the study of democratic politics as STS has previously offered to familiar topics of science and technology. This timely collection of empirical stories and conceptual inventions leads the way by showing how the making and doing of democracy can be placed at the centre of relational research.

The book turns the well-known sites of contemporary Euro-American participatory democracy, such as elections, bureaucracies, public debate and citizen participation, into fluctuating democratic situations where supposedly untouchable democratic ideals are shaped, contested and warped in practice. The fact that Euro-American participatory democracy is often upheld as an ideal for the rest of the world makes it all the more important to study how it is a situated, distributed, material, emergent, heterogenous, fragile and at times faltering figure and project. Through situated analyses, the authors demonstrate that democracy cannot be reduced to theoretical ideals and schemes of conflict, institutions, or deliberation. Instead, the volume offers an urgently needed empirically driven renewal of our understanding of democratic politics in a time when conventional ideas increasingly fail to capture current events such as Brexit, Trump and Covid19.

The twelve chapters are organised into three sections. The first part, entitled Interfaces of technodemocracy, focuses on how democratic politics is co-shaped by its interfaces with more or less rigid institutions and bureaucracies. The second section, Technosciences, democracy and situated enactments of participation, emphasises the relationships between science and public participation. The third part called Reconfigurations of democratic politics with new nonhuman actors focuses on the role of material objects, especially new digital technologies, in democratic politics.

Andreas Birkbak is associate professor at Aalborg University in Copenhagen and a co-founding member of the Techno-Anthropology Laboratory (TANTLab). Andreas’ research focuses on public participation and digital methods. His recent publications include ‘Participatory Data Design’ (book chapter in Making and Doing, MIT Press 2021, with Jensen, Madsen and Munk). Andreas has been a visiting scholar at multiple universities, including at the Centre for Interdisciplinary Methodologies (Warwick) and the Centre for the Sociology of Innovation (École des Mines de Paris).

Irina Papazu is associate professor in the Technologies in Practice research group at the IT University of Copenhagen. She has published a book in Danish on Actor-Network Theory in Practice with colleague Brit Ross Winthereik. She heads the Agile State working group in the Center for Digital Welfare, and she splits her research time between public sector digitalisation and public participation in climate change and energy transitions.

PART I: The interfaces of technodemocracy

2. The proposition: Compiling and negotiating democracy in a Danish municipality
Anne Kathrine Vadgaard

4. Use yourself, kick yourself! Learning from a newspaper how (not) to do good public debate
Andreas Birkbak

6. STS and democracy co-produced? The making of public dialogue as a technology of participation
Helen Pallett and Jason Chilvers 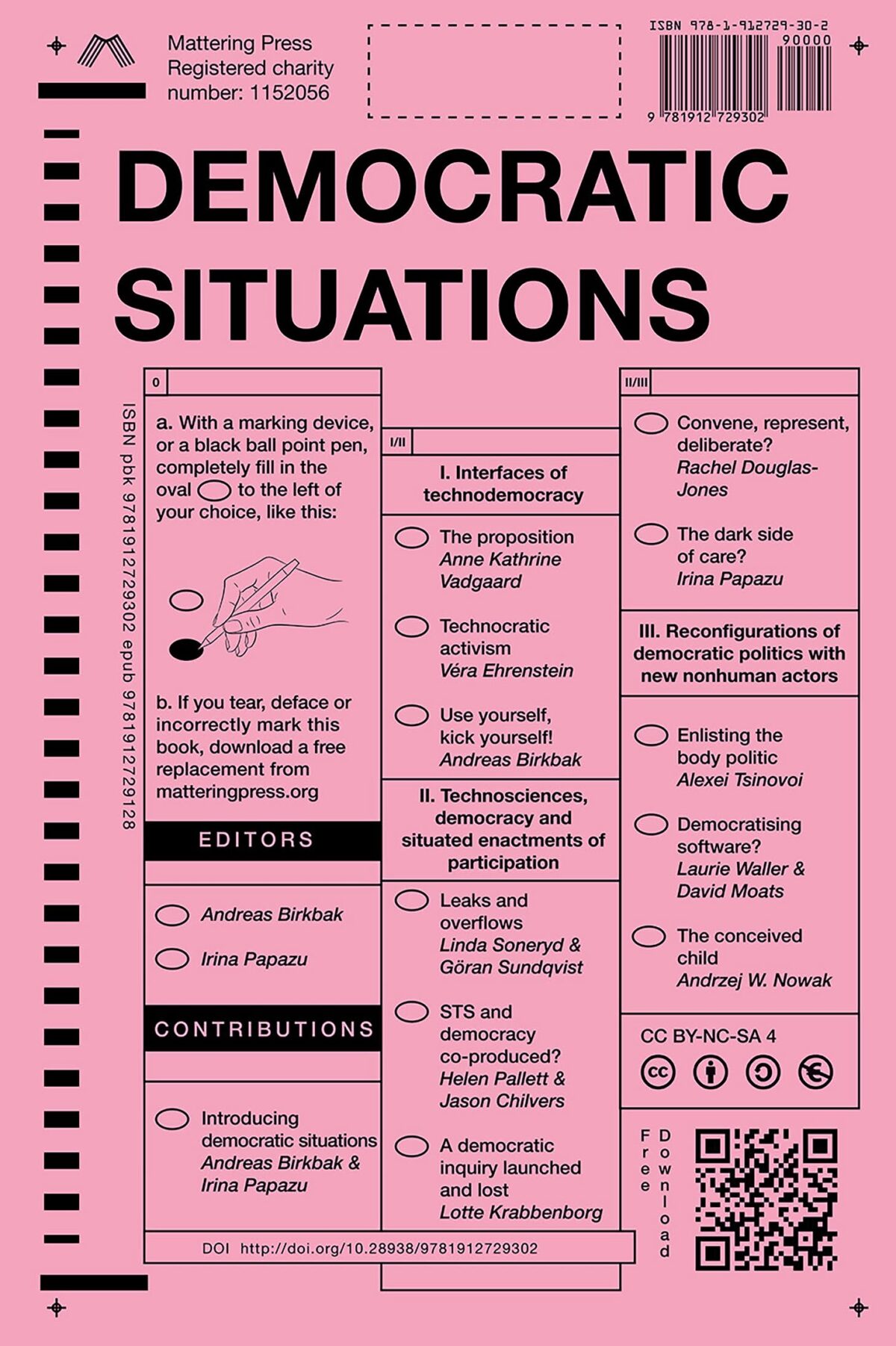