This is the story of a set of computational devices called Energy Babbles. The product of a collaboration between designers and STS researchers, Energy Babbles are like automated talk radios obsessed with energy. Synthesised voices, punctuated by occasional jingles, recount energy policy announcements, remarks about energy conservation made on social media, information about current energy demand and production, and comments entered by other Babble users.

Developed for members of UK community groups working to promote sustainable energy practices, the Energy Babbles were designed to reflect the complex situations they navigate, to provide information and encourage communication, and to help shed light on their engagements with energy policy and practice. This book tells the story of the Babbles from a mix of design and STS perspectives, suggesting how design may benefit from the perspectives of STS, and how STS may take an interventionist, design-led approach to the study of emerging technological issues.

Energy Babble is organised into three main sections – Framing, Designing, and Circulating – that trace the story of how a team of design and STS researchers made and deployed a set of computational devices to UK–based community groups. The book is introduced by way of a preface and introduction and contains subsections that describe the various ways in which the research into local energy practices was conducted. Katherine Moline provides a reflection on her three-year experience of curating exhibitions that features the Energy Babble device and the book comes to a close with an Afterword by Bill Gaver. 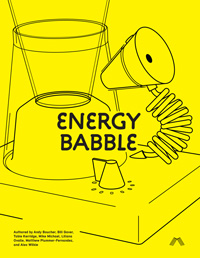