Writing this Foreword amidst daily news reports of the COVID-19 outbreak affords a very particular context for thinking about transnational security infrastructures. Events beginning in November of 2019 have made it abundantly clear that surveillance and control can be life-saving resources under circumstances of pandemic disease. Yet while population monitoring as a defence against exceptional threats to public health seems at once newly relevant, it is also clearly insufficient without the political will and organisational effectiveness required for the mass mobilisation of both preparation and response. Moreover, it is now clear that the effects of the pandemic disclose and amplify insecurities arising from more longstanding and systemic threats to planetary health and individual well-being.

Sensing technologies are, arguably, a quintessential kind of human/machine hybridity. On the one hand, like other infrastructural devices, sensor technologies must be designed to operate automatically so that once installed, they run continuously. Sensing technologies reflexively constitute the world as the kinds of data that they can sense. In most instances, moreover, their sensory capacities are radically different from our own; their ability to register signals undetectable by the human sensorium is central to their value. On the other hand the significance of what is sensed, and in the service of whom, is an entirely human affair.

This rich and extensive collection of studies examines sensors and sensing at the intersections of critical security studies and science and technology studies. The trope of in/security signals that insecurity and security are mutually constituted, and that states of one or the other do not objectively exist in any straightforward sense. Deployed in the name of securitisation, sensing technologies are enrolled in particular technopolitical regimes and associated designations of what constitutes a threat and to whom. Working through the generative frame of infrastructure, these studies track the conditions of possibility that enable specific, technologically-enhanced sensoria of threat detection and the worlds that they render legible and, as importantly, illegible. Far from seamless, their extent and redundancies nonetheless ensure remarkable degrees of continuity in operation. Notable for their scalability, electronic sensoria are engaged in processes ranging from rendering micro-organisms as genetic signatures, to monitoring whole-earth planetary transformations.

A crucial topic for these studies is the question of who feels threatened and who feels protected by regimes of surveillance, and how apparatuses deployed in the name of securitisation are at the same time generative of insecurity, in the ways that they presume and figure a threat. Contemporary security infrastructures, we are reminded, are deeply indebted to their military and colonial histories, which set the terms for who is in a position to monitor and administer whom. We learn how very different the resulting effects (and affects) are if surveillance from the air is done in the name of protecting those on the ground, or for purposes of rendering them as targets. It matters as well what the relations are between those who are positioned as vulnerable (for example, the wealthy in the so-called war on crime), and those who are figured as the threat (for example, the ‘unlawful combatant’ in the war on terror). We learn about the work of fear (whether of burglary or extrajudicial assassination) and the promise of protection to those that the apparatus figures as deserving. As vendors search for new markets, military technologies like the Predator B drone, developed to identify targets for attack abroad, are reimagined as a critical security infrastructure required to safeguard citizens at home.

Media accounts of technological developments typically conflate references to actually and already existing infrastructures and more speculative projects. Crucially, these conflations are performative, contributing to widespread acceptance of the fact that ‘it’s only a matter of time’ before that imaginary is more than a prototypical reality. Too often discussions around the proliferation of embedded sensing share with discourses of technological progress the naturalisation of sociotechnical developments. In the voice of the disinterested observer, the ‘advance’ of technology is described as if it were a kind of force majeure. The increasing presence of sensors in our built environments is not the result of an autonomously unfolding process, however, but rather of concerted actions on the part of those bodies (persons, agencies, corporations, states) invested in their proliferation. However large the investment, the proliferation is not inevitable.

The authors collected here ground their engagement with security infrastructures in empirical studies, which in turn make evident the political and practical contingencies that characterise actual projects. Countering discourses of seamless integration and linear development, these studies attend to the fragmented, boundary-constructing processes and very differentially distributed effects of infrastructuring. Transnational private/public partnerships carry discourses of the ‘smart city,’ promoting standardisation under the sign of innovation. Technological solutions searching for their problems, the imaginaries and technological devices involved travel across sites (for example, the Israeli Skystar 180 aerostatic surveillance balloon travels via College Station, Texas, to become one of a suite of surveillance technologies adopted in Santiago, Chile; US multinationals set the stage for ‘smart city’ projects of India and South Africa.) While technophiles defend these investments, those on the front lines of their operation frequently express scepticism regarding their efficacy. Enacted within the layered historical/political/economic realities of the target territory, standardised visions are torqued and hybridised, furthering unequal access to resources. The smart city and the biometric border are conjoined through schemes for profiling and risk assessment. We hear as well about devices for the (partial) detection of (messy), noncoherent surveillance infrastructures, themselves parasitic on the military lineages of GPS. And we are treated to the graphic-novel arabesques of visual vignettes, offered as a counter-genre for infrastructural inversions of both surveillance infrastructures and the media for their tracking and analysis.

As infrastructural studies have taught us, sensing at once requires and enacts delineations of similarity and difference, sorting and classification. Seeing is always seeing as. Infrastructural inversion as method underscores the importance of attending both to the labours and politics of creating accountable relations between data and worlds, and that which escapes the data sensorium. For and by whom are infrastructures themselves rendered variously visible (for example, to those who build, maintain and operate them) and invisible (to those who are their subjects/objects)? What modes of knowledge and action live in the digital sensorium’s blind spots and exceed its capacities of registration? What would it mean to re-engage the sensorium in deeper awareness of its politics? As the contributors to this collection suggest, new digital infrastructures rematerialise already existing social orderings, and are re/generative of dominant cultural, historical, political, and economic relations. At the same time, the configuration of sociotechnical infrastructures of in/security is always fragmented and open to contestation. Perhaps most importantly, then, we need to recover the partiality and contingency of surveillance technologies and their associated in/securities to recognise the forms of life that escape them and the different possibilities for knowing and world-making that those lifeworlds both demand and enable. 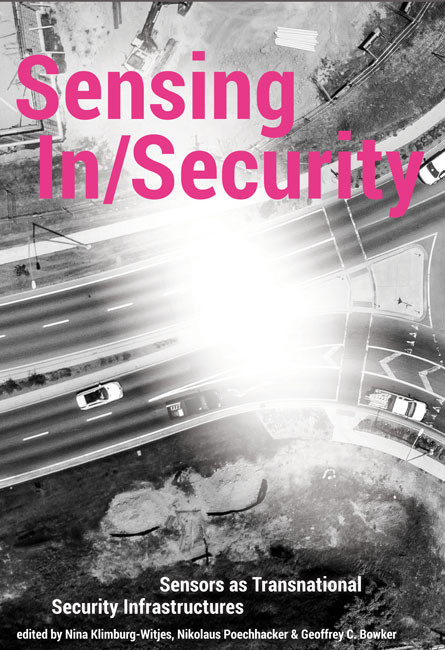