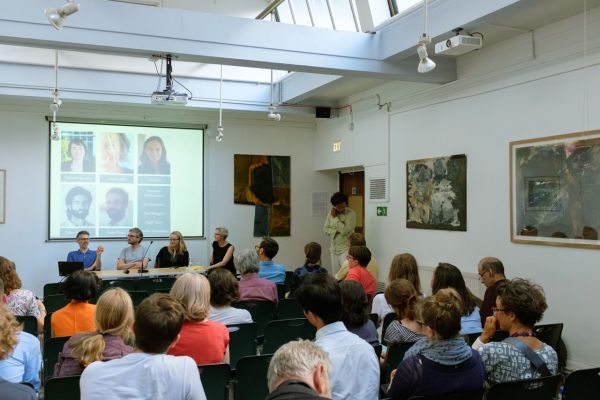 At some point during the proceedings that constituted the launch of Mattering Press at Conway Hall[1] I found myself looking at pictures of friends. Projected onto the screen in front of which an illustrious panel had gathered were the five absent present editors, Uli Beisel, Endre Dányi, Natalie Gill, Julien McHardy, and Michaela Spencer who together with the present present Joe Deville make up the press’s editorial team. I have been thinking a lot about friends during my short stay in London, the place I used to live and love for almost 17 years. That’s a long time to spin bonds and generally co-evolve and it was thus with a sense of pride, respect and great fondness that I watched the evening unfold.[2]

I remember when I underwent my formal academic training being given loose instructions on how to have an academic career. It went something like this: publish a book review, publish with your supervisor, better still publish a special issue, and the rarest flower of the flock: publish on your own, single-authored, peer-reviewed, ISI-ranked, h-index-x-factor. This is, as many will recognise, the prologue to a well-rehearsed lament about academic publishing and making a living in a domain that sees more and more people having to compete for less and less. Rather than add my own grievance to the pile, I want to return to the matter of friendship, something that is rarely examined with any rigour yet that runs deep through the fibre of academia, its structures and thoughts and footnotes.[3] It is also at the heart of Mattering Press, which is run by friends and relies on friends such as Ed Akerboom (web design), Alex Billington (typesetting) and Jennifer Tomomitsu (copy-editing). This, I suspect, makes it both easier and harder to do.

There are many kinds of friendship, some kinder than others, which is to say it’s important to ‘recognize the major marks of a tension within it, perhaps even ruptures, and, in any case, scansions’ (‘The Politics of Friendship’, Jacques Derrida, 1988, p. 635). ‘Scansion’, which refers to marking the stress or rhythm of a poem, is a nice term here as it lets us think about the soundness of friendship as well as its inscrutable and evocative qualities: all the stuff that needn’t be said or indeed that can’t be said. Things were of course said during the launch by various people: First by Carlos Lopez-Galviz of Lancaster University’s Institute for Social Futures, who noted the continuities in the different pursuits of conscious change, from William Morris (1834-1896) to Mattering Press. Both had found an amicable home in Conway Hall. Then Joe presented the press’s practical and ethical commitments, including its commitment to work inspired by an ‘ethics of care’, whether via Virginia Held’s feminism or Annemarie Mol’s relational empiricism. This means caring for authors, books, readers, reviewers as well as all the other, less obvious labours that go into Open Access (OA) book production and publishing and the socio-economic relations it (often reluctantly) enters and/or engenders such as Amazon, which I am not hyperlinking.

How such care might look was on display in Conway Hall’s foyer where Joe and I had set up tables to showcase and sell also other OA publishers’ books: Open Humanity Press, Meson Press, Mayfly Books, UCL Press, Westminster University Press and Goldsmiths Press. In the workshop that preceded the launch (Open Futures: The practical politics of academic book publishing, Goldsmiths) a key question that emerged concerned the intellectual challenges raised by the practical aspects of scholarly communication. It strikes me that Open Access publishing can provide a salient landscape for studying the fault lines running through friendship, also because it entangles so many different conditions of ‘open’ including in notions of promise, commitment, responsibility. One such promise might be found in striving for a different kind of academic writing, one that is more generous to its audience or perhaps less punishing to its authors. During the launch both Evelyn Ruppert, co-editor of Modes of Knowing and Michael Guggenheim, co-editor of Practising Comparison spoke about the close collaboration with the book’s designer (Julien McHardy) and how important it was to consider what things such as book covers or typefaces do. Evelyn commended the virtues of slow publishing and the long thought, neither of which find much sympathy in the just-in-time production of outputs.

Books and friends take time. But then, wonderfully, they also give and make time. Accordingly, it was a pleasant and languid launch, its temperament set by the formidable and slightly funeral floral arrangement that greeted guests in the foyer and that the caterers had surrounded with petite bowls holding nibbles. It looked a little like an altar ringed by offerings, which could also easily describe many disciplinary and institutional arrangements in academia. And thus it wasn’t surprising that an important question raised in the discussion touched on Mattering Press’s handling of inheritance and canon. It’s a tricky question for any discipline but perhaps specifically so for STS, which started off with aspirational iconoclasm but has in parts happily cemented a mannered historicism.

In her book Differencing the Canon (1999) the feminist art historian Grizelda Pollock makes some practical suggestions with regards to handling the canon in ‘productive and transgressive ways’: ‘[T]here are ways to question our own texts for the desires they inscribe, for the investments which we feign through telling the stories of our own ideal egos: the women artists we come to love and need to love in order to find a cultural space and identification for ourselves, a way to articulate ourselves – to make a difference to current systems that manage (….) difference as a negation of our humanity, creativity and safety.’ (p. 34)

I believe this remains an important commitment in our pursuit to understand the world and its incommensurable realities. In that sense it is incumbent on us all to take greater care with how we make books. Like friendship, scholarly practice and communication is about address, response and responsibility and like friendship, what’s at issue ‘is that which responsibility opens to the future.’ (Derrida, ibid., p. 636)

[3] In light of recent and not to so recent shady goings-on in HEIs might it not be prudent to be explicit about how, for example, friendship is not an appropriate relation between students and members of staff?