On the 12th November, at the 4S conference in Denver, Colorado, Mattering Press held a mini-symposium on the ‘Future of the STS book,’ as part of the ‘Making and Doing’ sessions.

This event gave us the chance to raise some of the questions that we meet every day as we puzzle our way through the challenges of becoming a new Open Access STS book publisher. As well as an opportunity to consider how these concerns connect with broader discussions around the ‘future of the book in STS’.

There was much to say, and looking back over this event now, we’ve been wondering if the discussion may have started to map out an expanded vision of publishing we’ve have been grappling to articulate for some time.

Books vs. other forms of printed text

Is there a difference between a book and other forms of printed text? And if there is, in what ways does this difference matter? These are some of the questions that John Law posed at the start of our session. He suggested that as academics we are always producing texts, and while some of these will appear as books, others will appear as articles, or other textual forms. It is, however, through the researching and writing of these texts, that certain realities and metaphysical positions are generated and regenerated, and certain institutional practices and knowledge economies are affirmed or denied. It is also in the assembling of these texts that it is possible to open up some elbowroom, a bit of breathing space, within the conduct of the normal in which they are involved.

Tahani Nadim drew on the German author Jean Paul to describe books as ‘long letters to friends’. She pointed towards the intimacy and a texture of a written text, and the complicity that exists between authors and a text’s real and imagined readerships. These readerships are not delimited by time and space, and may not always be academic in orientation. The American writer Henry David Thoreau wrote with a poetics which was not just for human eyes, but also the squirrels and muskrats. There are many textual formats which might be imagined for books and their readers: “books that are like the clandestine note you receive from your friend across the classroom, books that clean after themselves, symmetrical books, books like lichen, books you wear on your sleeve, becoming books and boundary books.” 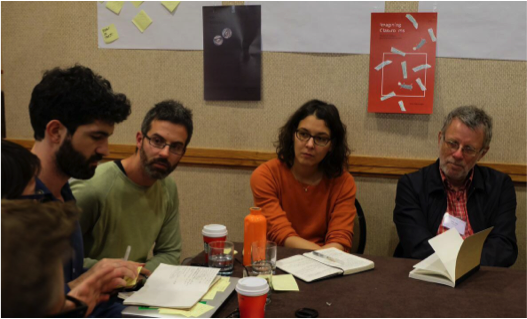 Geof Bowker suggested that it was no longer the book that is the central unit of publishing, but rather these days it is the database. He drew our attention to new forms of reading, which are emerging through new possible collaborations between humans and machines, and two new forms of writing which also accompany these shifts. For example, as multiple authors begin to publish their annotations to texts in real time, the content and ecologies of these texts continually change. Now, through such means, topological texts are beginning to emerge as new possible conjunctions to topological research.

Books that count vs. books that don’t count

Finally, engaging the question of peer review, Ivan da Costa Marques suggested that this core feature of academic publication helps with making things in a hurry. So in a way, it is more about money than it is about knowledge production. While members of an academic or publishing community are able to negotiate and separate good work from bad, the deferral to peer review offers a way to fast-track this process. And these days, while books may be recognised as always collective achievements, and while technologies and experiments in research help to make these collectivities visible, techniques for producing and accounting individual forms of authorship continue to remain significant.

Clearly there was more that was said. However, what can be discerned within these brief précis, is the figure of an ‘STS book’ which comes to life by negotiating its emergence through complex sets of tensions.

Any one published book may trace its own passage, finding the ways in which will work with differing forms of information, presentation formats and forms of authorial attribution as it pre-figures readerships and their reading practices. 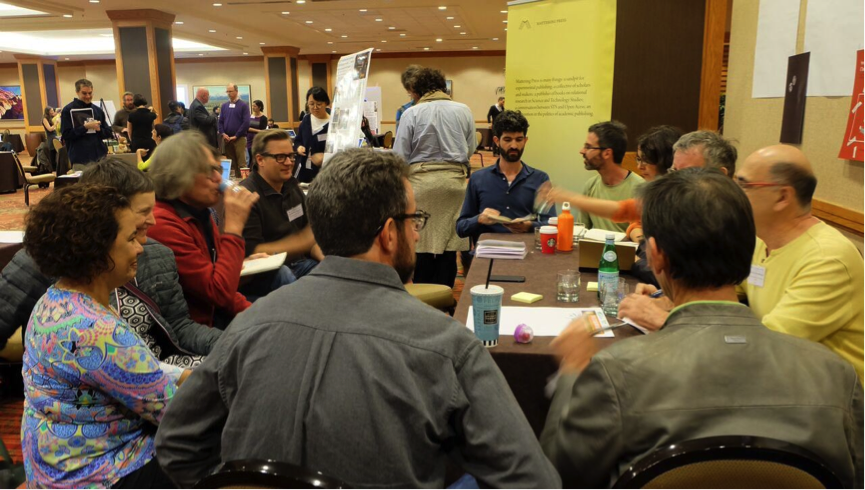 However, for Mattering Press, perhaps naming these tensions is helpful. Assisting us to keep in view the negotiations of current academic knowledge production that we are involved in, but which are not always easy to see or work with on our own terms.

As we continue to experiment with ‘open-ness’ in publishing and scholarship, it is the messy and practical aspects of such negotiations that this symposium seemed to draw out, and the work of navigating these tensions its speakers and participants all generously helped to support.