Academic publishing is intricately bound to evaluation. The demand to publish as much as possible has led to the chopping up of research into minimum publishable units across journals that are easily counted, ranked and evaluated. Books, however, are not so easily accounted for. Julien McHardy argues the value of books is in this freedom from evaluation which offers the chance to pursue greater care and experimentation. But book publishers may still have to calculate so that calculations do not dominate their considerations.

In June, I was invited to the annual esCTS Spanish Science and Technology Studies (STS) network meeting in Salamanca as one of the six Mattering Press editors. I led the session Publish like you give a damn, careful experiments in academic on the politics of academic publishing. Here, I introduced Mattering Press as a new publishing initiative set up to provide fellow junior scholars with a platform to develop and publish high quality Open Access monographs in the field of Science and Technology Studies.

But why would (young) academics write books, if articles are all that counts? The question took me by surprise. Having had some time for reflection since the workshop, I want to think about why we would write books if articles are the currency in which our value, impact and aspirations as (young) STS scholars are measured? 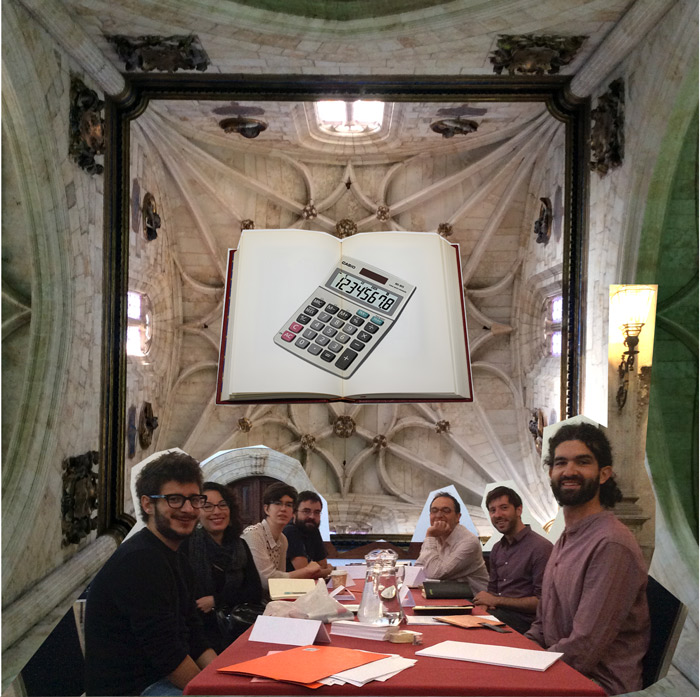 Our discussion took place at one of Europe’s oldest universities in the 16th century chapel of the Colegio Arzobispo de Fonseca. Its nave, designed to amplify the rightly positioned speaker, powerfully demonstrates the materiality of knowledge practices. This is important here because even though the importance of materiality in knowledge practices is core STS business, STS scholars have paid relatively little attention to the infrastructures and practices that support their own knowledge production, namely publishing. Elsewhere my fellow editors have started to discuss the politics of publishing and Open Access, here I focus on the role of the book. To understand why the value of (writing) academic books was questioned in Fonseca’s chapel it is helpful to know a bit more about the esCTS network and the circumstances that many of its members share.

esCTS started in 2010 as a peer support network of young Spanish and Spain based scholars working on STS issues. Even though established academics take part in esCTS’ meetings, it remains largely a forum by and for young scholars. Hit hard by the financial and institutional crisis, our Spanish colleagues face a two tier academic system of largely unobtainable, life-long positions and underpaid, short-term teaching or research contracts with little prospect of finding stable jobs or research money. The situation of young scholars in Spain is severe and many of esCTS’ members have left the country to find work elsewhere. However, the combination of precarious and poorly paid labour, high teaching loads and the pressure to publish or perish is by no means unique. Asymmetric economies of labour, value and evaluation that generally disadvantage young academics play out crucially in publishing.

The esCTS network sits somewhat awkwardly with academic structures, as it has no staff, membership, steady funding, hierarchy, formal structure, program, or strict disciplinary boundaries. esCTS’ unconventional setup is not the result of lacking resources or the marginal role of STS in Spain but part of an explicit effort to build a network that can operate on its own terms and remain largely independent of external standards, demands and accountabilities. Talking to people at the meeting, I gained the impression that being outside institutional accountability is both difficult and what makes esCTS a productive and exciting initiative. Like esCTS, books are not easily accounted for, because they are not easily counted, ranked and evaluated. In addition, according to our workshop discussion, books offer greater freedom compared to the stricter editorial, disciplinary and formal requirements of articles. And even where books count, for tenure for example, they do not register on a scale, but as singular achievements, either published or not (perhaps with the exception of prizes and awards). If books and the esCTS network share that they are not easily accounted for, we can start to consider that books might be valuable because they evade evaluation.

Evaluations employ a calculative logic that changes that which is evaluated (see for example Callon and Muniesa’s work on calculations). In the hard sciences there is an on-going debate about how the demand to publish as much as possible has led to the chopping up of research into the minimum publishable units that will be accepted in peer reviewed journals (casually known as MPUs). Research findings are perhaps less easily spread out in the social sciences, but the concept of an MPU provides a useful case to think about how the demand to publish is changing how and why we read and write.

Arguing that in calculations judgement (taken as qualitative) and calculation (taken as quantitative) are inevitably mixed up, Franck Cochoy coined the term qualculation. Riffing on Cochoy’s awkward neologism Callon and Law think about qualculation and non-qualculation to suggest that there is value in what cannot be evaluated. It is important that in their argument non-qualculation is not the absence of qualculation. Rather, both submitting to and resisting qualculation is understood as a practical achievement that depends on particular material arrangements. Following their argument, we can think of the academic economy of articles for example as a set of material arrangements that is more or less explicitly geared towards evaluation. Articles, the argument goes, submit to qualculation and demand a managerial relation to one’s own labour and that of others; books and monographs, on the other hand, can give room to non-qualculative logics because neither the passion, or love, or care that a book requires, nor the affects it inspires can be measured no matter the scale (See note 1).

The thought that books might be valuable because they evade evaluation resonates with Callon and Law’s argument that magic is what is set aside from qualculation. I don’t find it difficult to think of books as magical objects, but books cost money, and are reviewed and marketed and succeed or fail to elicit readers and citations. So how can books be thought of as outside of qualculation? I follow Callon and Law when they argue that qualculation and non-qualculation are not in binary opposition but sustained relationally, in practice. In relation to book making I understand this to mean that good book making is about negotiating the qualculative requirements of peer review, distribution, costs and marketing in such a way that other logics than those of qualculation may become viable. As publishers, we are concerned with numbers, sales, visibility, profit, and reputation and we are working hard to make sure that our books register as qualculable things. But we work even harder to make sure that bookkeeping logics do not dominate our book making because letting marketing, and evaluation logics dominate means to close down what a book can be and what can be published (See note 2).

Care and experimentation are two STS concepts that have helped us at Mattering Press to negotiate the kind of space we aim to create with the calculations we engage in, such as those of costs. The feminist concept of care has become important in STS (through the work of people such as Annemarie Mol, Jeannette Pols, Ingunn Moser and Vicky Singleton) to mark vital relations and practices whose value cannot be calculated and thus often goes unacknowledged where logics of calculation are dominant. The esCTS programme for example makes clear that universities depend on the unacknowledged and un- or underpaid care that many of its members provide. In publishing, thinking about care helps to make visible the on-going and collaborative work of authors, reviewers, editors, copy editors, proof readers, typesetters, distributers, designers, web developers and readers. More importantly perhaps, the concept of care can help to engage with calculative logics, such as those of costs, without granting them dominance. How do we calculate so that calculations do not dominate our considerations? What would it be to care for rather than to calculate the cost of a book? For us these are questions that invite experimentation because if non-qualculability is a practical achievement, it should be clear that there are many possible ways of aiming for it. The first Mattering Press books for example will be edited collections and monographs with clearly identifiable authors and clearly bounded texts because for now we focus more on caring and collaborative ways of making relatively conventional books. This is but one and arguably a relatively conservative strategy for allowing other logics than those of qualculation to take centre stage in publishing. Open Humanity Press’s Liquid books and Living books series for example explicitly undo the authored book offering instead a more permeable, malleable and perhaps more lively text. What matters then, is not to defend books as bounded objects, but to work towards ways of book-making and writing in which qualculation is neither the only nor the dominant logic. To argue that book writing and making, like the esCTS network, is exciting, productive and perhaps even magical, because it offers a space where some of the qualculative demands of academic life are suspended, partly answers the question why we as young STS scholars might write books. I realise however that it doesn’t even start to address the question how young scholars in precarious employment might find the strength, time and resources to write.

1) My intention is not to set up good books against bad articles but to make a claim for the invaluable quality of texts and the care and experimental, risky, strange, rigorous, inventive, un-disciplinary, unruly, collaborative and patient work it takes to make them. Keeping this in mind we can imagine book-like articles and article-like books. Limn in this sense for example can be understood as a magazine-like-journal for book-like-articles.

2) That books cost money, that publishing has to be economically viable, and that books too are reviewed, rejected and recommended are obvious objections to books as texts outwith qualculation. The costs of Open Access books and who pays these, is a question for a separate blog post. Here, I note that the price of Open Access books is anything but clear at this moment. Prices are either subsidised by the free labour (passion, self-exploitation, call it what you want) of volunteer run initiatives such as Mattering Press or set up as a kind of punitive tariff ($17,500 + VAT for an Open Access monograph with Palgrave for example) by a publishing industry whose current business models are unlikely to survive the widening shift towards Open Access publishing. While obviously biased towards Open Access initiatives, I do not suggest that the lines between good and bad always run between open and commercial-extractive publishing models either. Palgrave’s Pivot books for example established the mini-monograph as one of the most interesting recent experiments in academic book format and length. That said, Open Access publishers are almost certainly in a better position to make room for non-qualculative logics in publishing.

It remains for me to thank Rebeca Ibáñez Martin, Vincenzo Pavone, Pablo Santoro, Santiago López Garcia and the rest of the esCTS meeting organisers for the invitation to Salamanca; Guillem Palà for co-organising the Publish like you give a Damn workshop; those who participated for the early morning discussion and Tjitske Holtrop, Endre Dányi, Joe Deville and Rebeca Ibáñez Martin for their comments on earlier versions of this post.

This piece originally appeared here on the blog of the esCTS Network that hosted the event. It has since been reposted on the Hybrid Publishing Lab blog and on the LSE Impact blog.