This field guide to box practices explores boxes in their widest sense and scope – from test tubes and storage containers to cases and chests, from toolboxes to entire buildings, or even digital boxes that are distributed, rather than contained. Boxes do lots of things: they open and close, fold and unfold, hold still or speed up. Boxes work as sorting devices, they categorise and draw boundaries, they shut out, they enclose. They hide, store, silence, or expose, and bring about alignment, separation, filtering, or enhancement. Sometimes boxes are firmly moored and bound to a place, but often they are in motion, and mobilise what they contain. Whether as an ark or a Trojan horse, boxes can be cunning devices: they can harbour stowaways or smuggle things. Boxes can be shipped as cargo, with a destination in mind or just floating around. Unlike free-floating signifiers, they materially hit the road and produce friction (Tsing 2004). Even when they are on the move, boxes encounter responsive and resistant matter; they are active participants in ‘worlding’ and re-worldings (Haraway 2016, 50).

Boxes and box practices have been key to scientific knowledge production, from cabinets of curiosity in Renaissance Europe and colonial expansions of natural history, to twenty-first-century biobank storage. Today’s Euro-American knowledge was formed around objects amassed from colonies and stored in imperial collections. The epistemic infrastructures of such collections continue to enact Eurocentric orderings, for instance by categorising differences into hierarchies of progress and development, divisions and exclusions of others as ‘non-civilised’. Their material infrastructures and supply chains, epistemic and economic, are thereby tainted with violence.

If there were a science of boxes today, it would be logistics, a field continually on the rise with capitalism’s inescapable logics of the circulation of goods. Indeed, logistics has become world-making (Dommann 2011, Cowen 2014, Klose 2016); its devices include standardised containers, but also box management tools like tracking systems, performance indicators that optimise workflows. Performance indicators have entered nearly all sectors – science and everyday life, corporate worlds, public services and academia. Logistics devices such as databases, checklists, and standards combine with earlier forms of bureaucracy to order and infrastructure social worlds (Star 1999). Indeed, logistics seems the twenty-first-century actualisation of ‘the project of a general science of order’ described by Foucault (1994) in his user guide to The Order of Things.

However, classifications and ordering devices can become ‘entrapments’, as much a physical as an epistemic snare (Squire 2015, Benson, this volume). Western divisions such as the nature/culture dichotomy are also examples of such entrapments that lock in our thinking (Haraway 1988, Latour 1993). Scientific practices have used boxes to enact analytic divisions, but at the same time, things keep falling between neatly designed categories and between the cracks of existing research infrastructures. Whatever classifications boxes craft to sort and neatly categorise things into discrete groups, another in-between space will pop up at the interstices between groups, and new boxes will claim the space in between. Each box or group of boxes stimulates this infinite process.

Interestingly, the terms ‘box’ and ‘boxing’ also have a nautical connotation: to ‘box’ a compass means to test and to calibrate an orientation device. Sailors have referred to ‘boxing’ as the rehearsing of the different points and compartments of a compass in a certain order (OED online 2017). The navigation technique used in seafaring consists of a needle, a compass and its grid of compartments, and observation of the stars. It plots one’s orientation in the otherwise unstructured surface of the sea and its non-categorised, non-compartmentalised space. Techniques such as boxing the compass transform the ‘smooth space’ of the sea into a ‘striated space’ (Deleuze and Guattari 1987: 501), a space that is mapped, structured, and covered by coordinates. While these grids enable navigation, an overcoded space can revert to smooth space again. Boxings and the fixed techniques of orientation are relational as well – they are less stable than commonly assumed, and we need to understand, navigate, and engage in their performativity.

This book offers navigation tools for the study of boxes, modes of boxing, and emboxments (Engstrom, this volume). As a first navigation aid we make reference to – and recalibrate – a particular box that has been prominent in STS: the ‘black box’ (Latour and Woolgar 1986, MacKenzie 1993, Winner 1993). ‘Opening the black box’ of scientific knowledge production in STS was originally a constructivist move to render visible hidden assumptions and powerful mechanisms at the core of knowledge production. In studies of cybernetic models and beyond, STS analysed ‘black-boxing’ as a bracketing practice and exemplar of the naturalising and depoliticising work in the modern sciences. Yet, in Michel Serres’s account of the black box, we also find a different cue: Serres (2008: 110) relates the black box to a space of resonance and transmission, shifting our attention to listening instead of seeing and (visual) representation, to thresholds, mixtures, transductions, passageways, and sensations, as well as to the social boxes we inhabit. This redirects attention from the cybernetic black box to the myriad ways boxes populate and animate relational spaces.

Thus, rather than aiming to uncover what is hidden inside black boxes, or identifying and categorising this ‘content’, this book invites an exploration of relational ontologies infrastructured through box practices. Addressing but also going beyond the box practices of categorising, comparing, abstracting, and deducting, box studies help de-centre standard infrastructures of knowledge-making (Law & Ruppert 2016, Deville et al. 2016). By means of assembling a much broader array of box thinking, this field guide aims to foreground the complex work that material box practices do in infrastructuring things and relations, as well as the enduringly violent orderings and exclusions that boxes may also afford.

Our second navigation tool is the abducted field guide that we use in a performative mode in order to make space for generative critique (Verran 2001). Experimenting with a natural history of boxes through the format of a field guide invites readers to think about boxes and box practices differently. It helps examine tensions between orienting, ordering, and organising, and contrary moments of disruption and multiplication. We do not aim to construct a fixed taxonomy of boxes to identify species with a documented reference specimen, but rather expose the field guide format to recalibrate our thinking about box practices and their infrastructuring work. Hence the book performatively turns the field guide method inside out, exposing the ways it works and fostering perpetual recalibration of our approaches in the study of orderings. In organising these box stories, we have resisted imposing the assumed logic of any single classification, chronological or geographic schema, or predefined genealogy. Instead, playing on Borges’ fantastic bestiary (Foucault 1994), we invite readers to delve into a range (but not a totality) of box materialities, which can sensitise us to the resonances and frictions at work in box practices. Our attention to materiality is less about material culture or a grammar of things than about materialisation-in-practice. Thus we are interested in the range of material relations that boxes afford, enact and compel.

Our third navigation tool works with identification keys and their modes of relating and layering. In botanical and zoological field guides, identification keys are used to taxonomise and identify species within their manifold diversity, for example based on their morphology, behaviour, or habitat. Such guides thus function as multi-layered aids to decision. Our field guide to box practices abducts these cross-cutting identification devices. Each box essay begins with an image, a box ‘taxonomy’, and keywords related to box practices. The identification keys that precede each box chapter work in a bottom-up mode, in that they derive from but exceed the scope of the box essays. As bottom-up taxonomies, the abducted identification keys challenge assumed epistemological classifications: they generate many possible entry points and performatively work towards de-centring taxonomic grids. Instead of a chronological or alphabetical order, we introduced another transversal set of productive identifiers or taxa – trap, juke, time, cargo, black, text, ice, anxiety, count, mirror, tool – to organise this book. We chose a prime number – eleven – for these identifiers, which also resists neat subgrouping. Rather than defining and enclosing groups, these keys open up and generate new connections and resonances. These impossible taxa give rise to more imaginative engagements that help crack open and de-centre academic orderings and their formats (Arens and Schlünder, this volume).

Systems of knowledge in particular are replete with box practices, including the ‘boxing of ideas’ (Parker 2013). But they also literally rest on the circulation, boxing, and categorising of things, and their mobilisation as objects in natural history (Hammel, Nadim), modern life sciences (Grote, Mechler, Schlünder), and population counts (von Oertzen, Bauer). Boxes assemble things and enact orderings into container and contained – in transportation but also measurement processes (Rentetzi). Putting layers of boxes and packages around content contributes to creating its value (Darmstädter, Olsén). Some boxes are just abandoned remainders, mere packaging of contents that are discarded as waste (Blacker), or else reused and inhabited by others who are confronted with austerity regimes (Rentetzi). Boxes are present when we store, categorise, and transport things such as tools, specimens, office materials, or files on the screen. They make up the scaffolding of our understanding and thinking in medicine – even the brain is a body box (Kısmet Bell). Moreover, digital tools and storage are, as much as material archives, also replete with box practices (Chen).

Boxes can teleport, release, or spill the things they carry. Boxes come attached to influential imaginaries like the Wunderkammer, the ark, or the ur-box (Güttler et al.). Boxing biological material and artefacts, as in colonial science, raises issues of ownership and restitution (Allen). Archive boxes, treasure chests, and miniature cabinets work as framing devices that render things into knowledge objects and, by carefully enclosing them, enact them as objects of epistemic value (Bowry, Schäfer). Entire institutions are set up to present fragments of the past (Endo, Razzal, Palioura et al.). The museum itself is a box and a time machine, with intersecting, folded temporalities and unintended teleportation – like cigarette boxes used to store archaeological finds (Galiniki and Akrivopoulou). While logistics, map-making, and orientation devices are entangled in a history of colonialism, with their imposition of boundaries between Occident and Orient, Global North and Global South, here, close attention to box practices and their transductions invites more daringly speculative modes of box studies. Following the aid boxes (Widmer) and attending to practices of enveloping (Gonçalves) can help us de-centre fixed, hegemonic orderings and make space for the multiplicity of box practices.

This field guide to box practices is a call for further box studies. As enquiry into taxonomies, this book is not about taming boxes somehow located ‘in the wild’, by means of an inventory. Rather it invites us to stay with the tensions between identification keys and the world. The field guide exposes techniques of ordering and identifying to testing and calibration – its website invites perpetual boxing as a means of understanding, speculating, and intervening in the orderings that go with box practices. To this end, a compass – and reference maps as we know them – won’t do. Or, to say the least, they are in urgent need of recalibration.

——, Staying with the Trouble: Making Kin in the Chthulucene (Durham: Duke University Press, 2016).

Klose, A., The Container Principle: How a Box Changes the Way We Think (Cambridge MA: MIT Press, 2016). 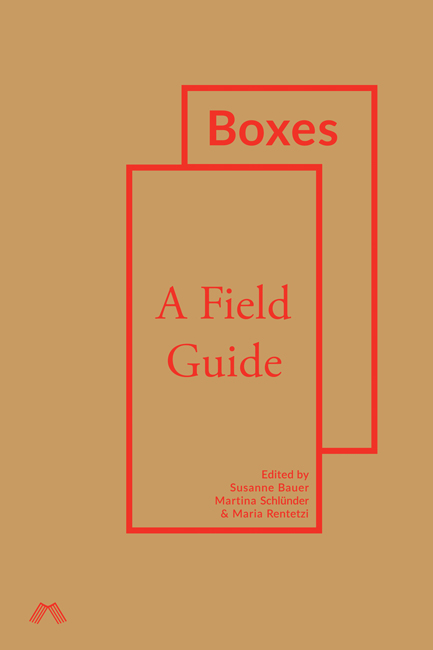